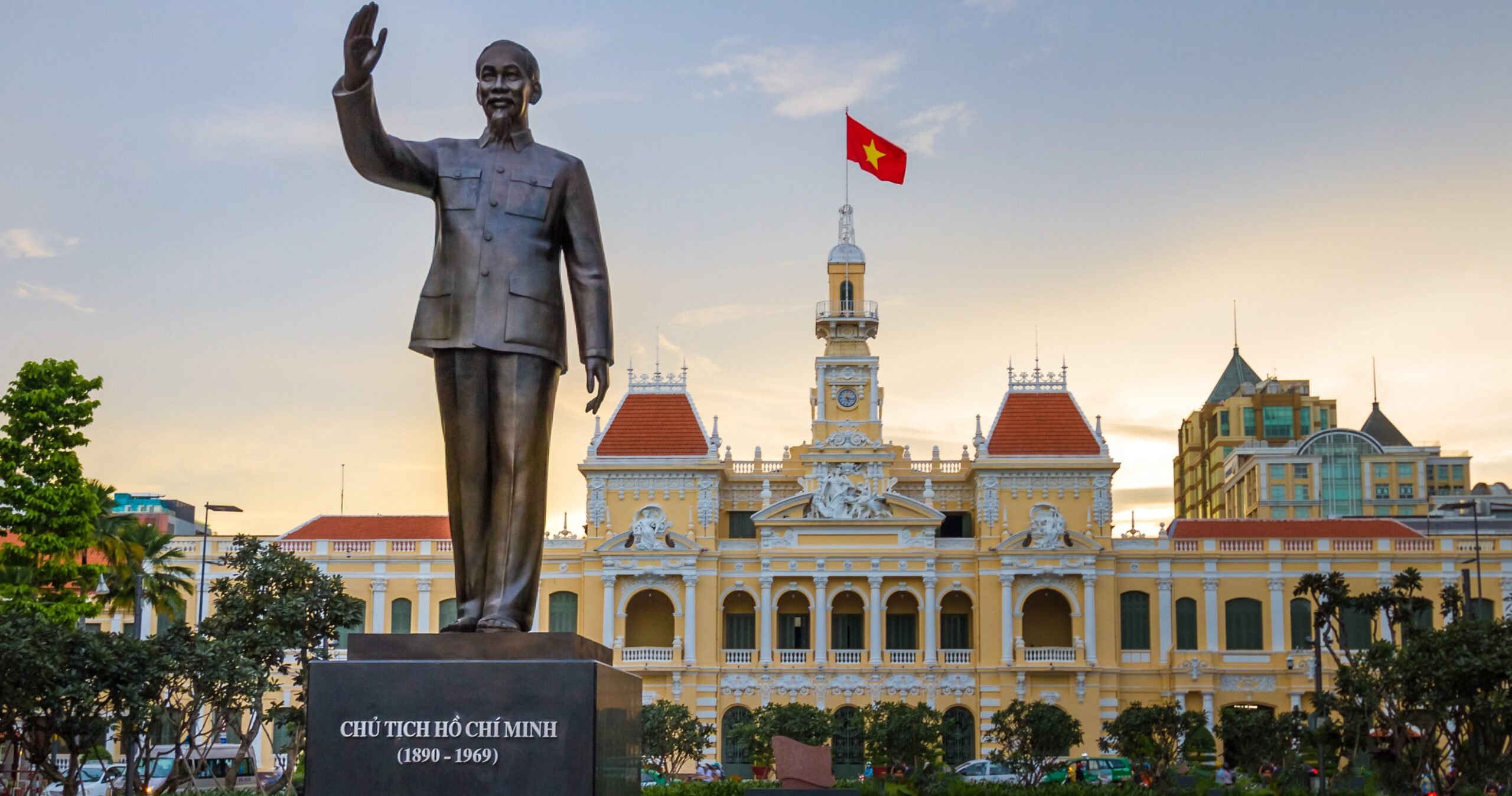 District 1 is often cited as the beating heart of Saigon, a highly urbanized area that serves as Ho Chi Minh City’s center for economics, business and commerce. Having seen rapid development throughout the years, it is the city’s busiest district by far, and the one with the highest standards of living. It’s a good place to start if this is your first time to visit Vietnam: District 1 is a very tourist and expat-friendly zone that retains plenty of local flavor, despite the presence of modern skyscrapers and mega shopping malls. Here, Eastern traditions merge seamlessly with Western sensibilities for a truly no-compromises holiday experience. Below, we list some of the attractions you shouldn’t miss out on:

Many of District 1’s historical buildings were erected during the French colonial era, and this majestic cathedral is the perfect representation of that time period. Constructed between 1877 and 1883, the Notre-Dame Cathedral Basilica of Saigon was modeled after the famous Notre-Dame de Paris and features a similar neo-Romanesque, French Gothic architectural style. All its original building materials were imported from France, including bricks from Toulouse, tiles from Marseille, and glass from Chartres; the total cost of the structure before the bell towers were even built had amounted to 2 and a half million francs. Today, it is a living piece of art that watches over Ho Chi Minh City’s government quarter, where mass is still held at 9:30 AM every Sunday. There are plenty of hotels in District 1 that are walking distance from this landmark (use khách sạn quận 1 for a more localized variety of results), which is conveniently nearby similar attractions such as the Saigon Central Post Office and the Reunification Palace.

Also known as the Independence Palace or Dinh Độc Lập in the local tongue, this former presidential residence is steeped in history, notably as the site of the end of the Vietnam War. Designed by French-trained architect and Grand Prix de Rome winner Ngô Viết Thụ, the palace itself has remained largely untouched since its completion in 1966 and is representative of the architecture of that era. Today it functions as a museum and is open to the public if there are no official events taking place on the property. It has seen several renovations, but many of the accessible areas have been meticulously preserved, including the former president’s office, living quarters, and the fascinating basement area, which features an intricate network of tunnels connected to war rooms, communication centers, and a bomb shelter.

This 10-hectare park is a welcome pocket of serenity in what is otherwise a city often described as “intense” or “frenetic”. Centuries-old African mahoganies and other tropical trees provide shade to bench-lined footpaths, making them attractive sites for jogging and other fitness activities. A miniature replica Champa Temple stands in the center of the park. A shrine dedicated to the first kings of Vietnam called Monument to the Hung Kings is also within its perimeters, as well as a contemporary sculpture garden worth exploring. Tao Đàn Park is most well-known for its “bird café”, which was featured in an episode of CNN’s Parts Unknown, hosted by the late Anthony Bourdain. Less a real café and more an informal gathering of avian aficionados, local elderly gentlemen and their pet birds flock to the park in the early morning and converge in the open-air bird corner so that the animals can learn each other’s songs while their owners talk shop and exchange ideas.

Located in the heart of downtown District 1, this pedestrian area runs a total of 900 meters from the People’s Committee Building all the way down to the Saigon River. Flanked by gorgeous colonial-era architecture on both sides and decorated with multi-colored lights and fountains, Nguyễn Huệ Walking Street is a major draw for both locals and tourists especially over Tet, the Vietnamese New Year. There’s a nightly fountain show, music and dance performances on the weekends, and no shortage of shops, restaurants, and cafés to peek into. Nguyễn Huệ is also home to the viral attraction that is Saigon’s Café Apartment, which is exactly what it says on the tin. Tenants of this apartment building began renting out their units to independent boutiques and cafés despite the dubious legality of the practice; these businesses have since adorned the building’s façade with their own creative signages, and now the structure resembles a veritable chocolate box of treats that makes for a great Instagram-selfie backdrop. The cà phê isn’t bad either. Check it out at 42 Nguyễn Huệ.

Ho Chi Minh City’s sights and sounds can be overwhelming to someone who isn’t used to it. Ease yourself into the experience by visiting these sites, and you’ll soon find yourself wanting to see more of the Pearl of the Far East.